Since this is the first interview let me explain a little bit about what Web Artist Weds. is all about. I've been writing and drawing Evan Yeti for almost three years and always wonder about the processes and preferences of other web-comic creators. So I made a list of twelve questions that I would love to have answered by my favorite web artists. Like the awesome people they are, the artists responded. Now every Weds. we'll take a walk into the mind of a new creator and see what makes them and their comic tic. 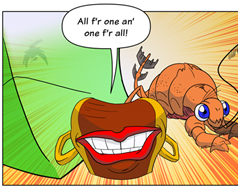 Let's get to know Mike R. Author and Artist of the web-comic Rusty and Co. which updates every Wednesday at noon. Today! Here are Mike's answers to the big twelve...


1. For the poor souls not already reading, please give a brief synopsis of your comic.
When a few monsters realize that lurking in dungeons is no way to live,
they decide to become famous adventurers, just like all those humans and
elves and dwarves and other "pretty" races.

2. What materials and/or software do you use?
Most of the strips are done completely digitally, using a Wacom tablet,Paint.NET (to ink) and Photoshop (to color and letter).

3. Are there any books, movies, toys, artists, or authors that have inspired or continue to inspire your comic?
Most of the monsters and settings in Rusty & Co. come from 20 years of
experience playing Dungeons and Dragons.  There are a lot of cliches (and
reversals of cliches) at work there.  My favorite comic artists are Adam
Warren, Jamie Hewlett and Jack Kirby, though I got my start as an artist
by painstakingly copying panels by Rumiko Takahashi.

4. Are any of your characters based on real people in your life?
All of the characters are composites of people I've played D&D with over
the years.  The guy who thinks he can talk his way out of any situation,
the guy who only cares about killing as many orcs as possible, the girl
who only plays at first because her boyfriend does, then continues to play
even after he leaves the group... they're all in there.

5. Are there any actors you know you would want to play or voice certain
characters in a movie of your comic?
While Dan Harmon was writing "SCUD: The Disposable Assassin", he would
give a "cast list" at the start of each issue so you'd know which actor's
voice to imagine while reading the comic.  It was pretty effective, at
least to me.  So I always have a specific actor (not necessarily a famous
one) in mind for each character in Rusty & Co.  I find it helps me write
them more consistently.

That said, Mimic is John Travolta, Rusty is Frank Welker, the Princess is
Debbie Harry, Roxy is Gwen Stefani,  Presti is Nicki Minaj, and Madeline
is Tara Strong.  I hope they don't mind.

6. What songs would you like in a soundtrack of your comic?
Probably a mix of goofy 80's pop, sitcom themes, and Norwegian black metal.

7. What is your overall goal for your comic?
To make D&D players say "I wish we played in THAT game!" and to make
non-D&D players say "I get why you play, now!"  It's up for debate
whether that's a reachable goal.

8. How has managing a comic impacted your life?
Very little.  It only takes about 6-8 hours a week to do the strip, so I
usually get it done Sunday evenings.  I still have a day job and all that.
Most of my friends, if they read the comic, rarely mention it.

9. What do you do to advertise your work?
Not too much.  I occasionally drop a few bucks on ProjectWonderful.  Most
of my traffic comes from word of mouth, since my strips get frequently
linked to on various RPG forums.

10. Web comics can be very time consuming and sometimes expensive to keep
up. Often there is little reward in regards to money and sometimes public attention. Why do you do it?
In my day job, I don't always get a lot of control over what I have to
draw, model, animate, or storyboard out.  The comic is a great outlet
where I can do what I want, only having to answer to my fans.  And
thankfully, most of my fans (the ones who comment regularly anyway) have
reached the point where they know I'm going to take them on a fun journey
so they don't nitpick the details along the way.  It's a good deal.

11. Got any other projects we should know about?
No, but I'm planning to ramp up the Rusty & Co. media empire this year.
With any luck, I'm hoping to get a store up and running, along with a few
other little surprises you'll just have to follow the comic to see.

12. What advice would you give to aspiring creators?
Don't stagnate.  Don't ever stop improving because you found your "style"
or because your friends tell you how awesome you are.  Try new things.
Last year, I started looking into Flash animation because I'd never done
it before, and this year, I began learning to sculpt with clay.  You'd be
surprised how often a new creative venture feeds all your other ones too.

Informative answers and great advice! Thanks so Much for your time Mike!

So whatta' ya' think? Leave us some comments below to tell us how you feel about Rusty and Co. ,Mike's answers, the questions or additional questions you'd like to see in the future. If you don't have anything clever to say, please check the funny, interesting, or cool boxes at the bottom to let us know you were here. Thanks for reading! Now head on over to http://rustyandco.com/ and read Mimic's dialogue with John Travolta's voice.

If you would like to be interviewed about your web-comic send an email to evanyeti@yahoo.com titled "interview" with a link to your comic.
Posted by Mat at 10:50 PM